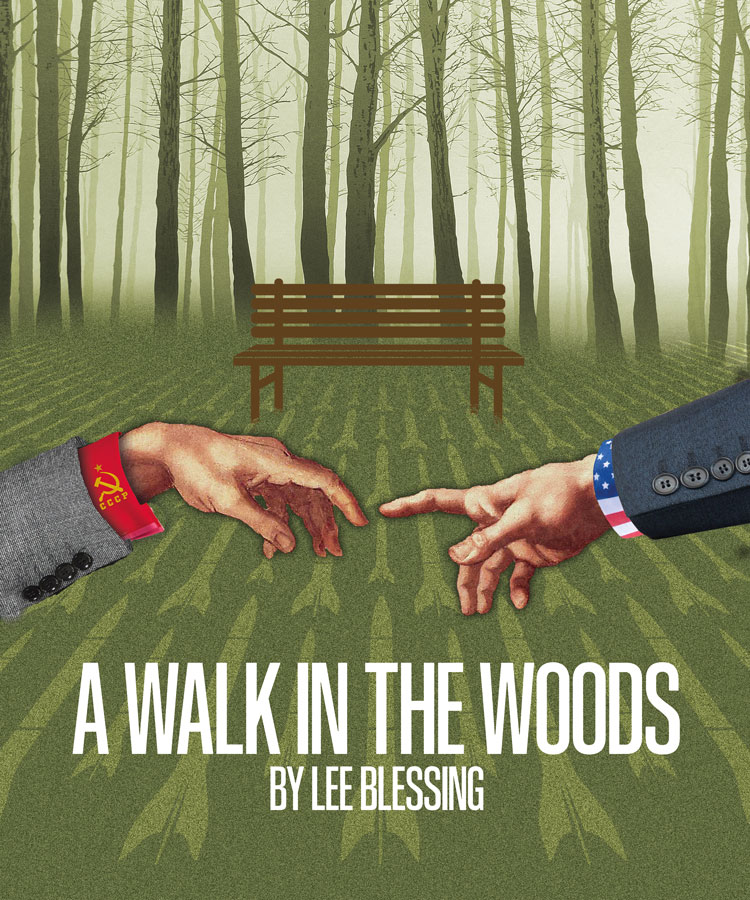 Set in pleasant woods on the outskirts of Geneva in the late 1980’s, two arms limitation negotiators , one Russian and one American, take a stroll. Away from the glare of the negotiating table, they develop a relationship even though their personalities are very different.

Botvinnick, the Russian negotiator says: “How best to be Russian then?  Fight collectively.  Know you are trying to crush those around you.  Make control your god, and channel the many wills of the  people into one will.  Only this will be effective.  Only this will defeat your neighbours.

“The most exciting thing in the world is to know we can destroy the world. In a day. To know the bombs and the soldiers are in place.  Their hands at the controls. The computers constantly running, monitoring, ready.  Alexander, Napoleon, Hitler would give up all their conquests just to live in a world where such destruction is possible.”

Honeyman, the American negotiator replies: “If we don’t believe in the ability to save ourselves, then everything dies.  All through history man has been able to love destruction and be excited by violence – because no matter what stupid, gaping terror he created, it was always survivable.  But no more.  We have to find whatever crumbs of goodwill exist in us. We have to start with the bare fact that there are two of us here.  That underneath whatever motivation brings us here – hate, fear, gain, there is something that will ultimately save us.”

Both a Tony Award nominee and Pulitzer Prize finalist, Blessing has created an intriguing and thought provoking drama as relevant today to the conflict in Ukraine as it was in 1988.

As we say a fond farewell to Shakespeare and Co, w

“It’s simple, all you have to do is go to the

AND THE REVIEWS ARE IN! ❤️ Who better to tell

When Shakespeare finds out you haven’t got your

Only a handful of tickets left for our opening per

With 3 days to go until opening, it’s time to ch

INTRODUCING THE CAST OF SHAKESPEARE IN LOVE (PART

INTRODUCING THE CAST OF SHAKESPEARE IN LOVE (PART

With the show opening next week, it's time to meet

Yesterday the theatre was used by CASPA to host a

Today is Shakespeare’s Birthday! Why not celebra

If you loved the film you’ll love the play even

With the curtain coming down on Hobson’s Choice,

🥾 Hobson’s Choice 🥾 Tonight is the night