Jeeves and Wooster in ‘Perfect Nonsense’ at Hever Castle 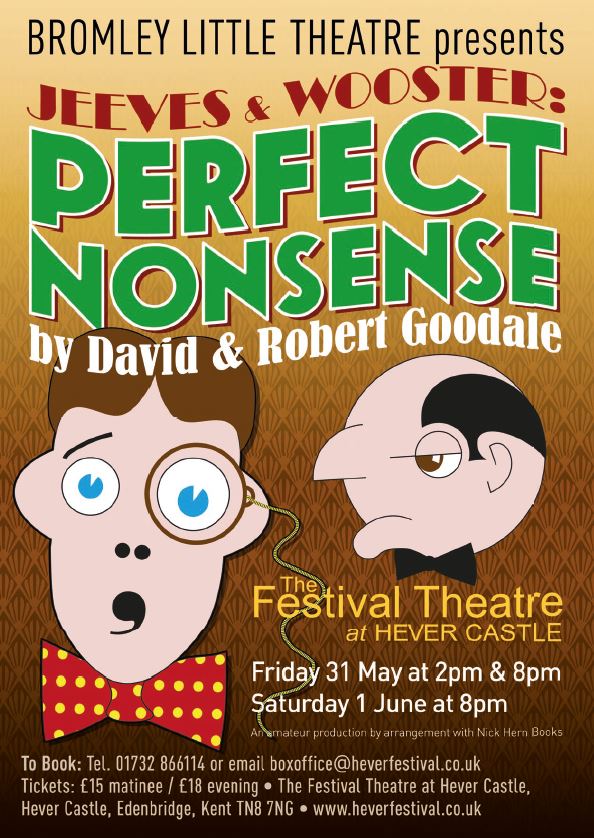 By David and Robert Goodall. Directed by Jessica-Ann Jenner

After the success of previous productions at the Hever Festival Theatre:

‘Anne Boleyn’ 2014, ‘The Pitmen Painters’ 2015, ‘One Man, Two Guvnors’ 2016, ‘Nell Gwyn’ 2017 and ‘Pygmalion’ 2018, Bromley Little Theatre returns with the winner of the 2014 Laurence Olivier Award for Best New Comedy: ‘Jeeves and Wooster In Perfect Nonsense’. Bertie Wooster has hired out a theatre for his one man show but has overlooked some of the challenges of presenting the many characters of his story on stage all at once. Luckily Jeeves is on hand to save the day. Add to the stage one enthusiastic maid with a penchant for impersonation, a pile of costumes and a miraculously constructed set and we’re ready for one hell of a show! Fast-paced, slightly anarchic and seriously funny, PG Wodehouse’s much-loved characters come to life in a riot of laughter, sillivness and theatrical invention. A spiffing start to summer at Hever!

The Cast:
Bertie Wooster as himself
with assistance from Jeeves and Young Seppings

Meet the characters in this powerful two-hander, w

Only FIVE chances left to see Beautiful Thing at B

Audience reviews for ‘Beautiful Thing’ are in!

“Dance with me” Have you booked your tickets

We are deeply saddened by the death of Her Majesty

Here’s a peek into the rehearsal photos for ‘B

Tickets are available for our next show, Beautiful

"I have a cunning plan!" Tony Jenner directs our