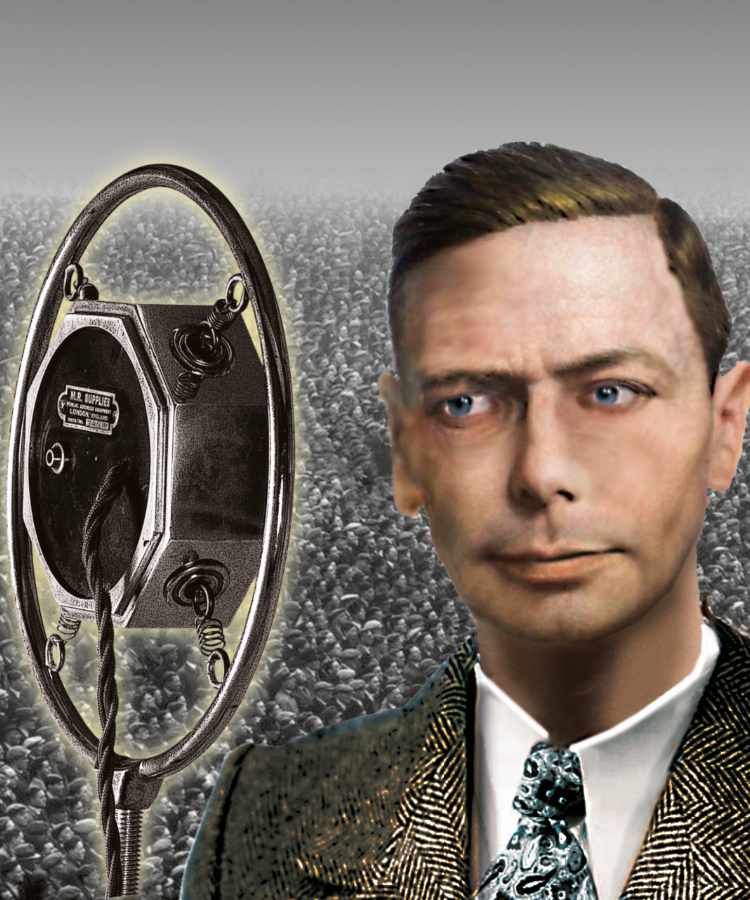 ‘The King’s Speech’ was written by David Seidler in 2012 and was based on the Oscar winning film of 2010 for which Seidler also wrote the screenplay. It was performed at Wyndham’s Theatre in London’s West End and received critical acclaim. Although not an amateur premiere at Bromley Little Theatre, it has hardly been performed since 2012 and we are thrilled to have secured the performing rights of a play that tells such a great story

The story of how King VI overcame his fear of public speaking through the help of Australian speech therapist Lionel Logue was first researched by David Seidler in the 1970s. He had originally conceived the piece as a stage play, and contacted Valentine Logue, Lionel’s son, and was able to gather information about the story. Valentine Logue asked Seidler to contact the Queen Mother and ask her for approval of the story being publicized. The Queen responded she did not want the story told until after she died. The Queen Mother died in 2002, and it wasn’t until 2005 that Seidler began working on the story again. It was instead conceived as film. The film version of The King’s Speech, that starred Colin Firth as King George and Geoffrey Rush as Lionel Logue, was a critical success and won several Oscars including Best Original Screenplay for Seidler. The success of the film encouraged producers to bring the story to the stage as originally intended.

The play focuses on Prince Albert, the second son of King George V. Albert, also styled Duke of York and affectionately known as ‘Bertie’ among his family, never expected to be King because his elder brother was only 18 months older than him, and thus was likely to reign for a considerable time, and potentially have offspring who would take precedence. However, when Bertie’s father dies and his brother David accedes to the throne, a constitutional crisis erupts when David wants to marry the divorced Wallis Simpson. Defiant and unwilling to continue as King without the support of the woman he loves, the King abdicates, leaving Bertie to take over the top job at ‘the firm’. But Bertie has a dreadful stammer and seeks assistance from Australian wannabe actor, Lionel Logue, who is also a speech therapist, though without formal academic or medical qualifications.

Writer David Seidler became interested in King George VI’s stammer when a boy as he also suffered from the same impediment. The play, though, is more than just an account of a man’s desire to rid himself of a speech disorder as it also deals with contrasting classes, attitudes and manners in British society. The stuffy royal household are slaves to convention, and the same is true of the British politicians, as well as the church personified by Cosmo Lang, the Archbishop of Canterbury. The formality of the establishment is contrasted with Lionel Logue’s down-to-earth, laid-back antipodean approach to life and therapy which, as if you couldn’t guess, works the necessary magic on the King’s vocal delivery.

Basically, it is a cracking good story and the stage version allows Seidler more room to explore the story’s political background. We are made more aware of the threat posed in 1936 by the Duke of York’s brother, Edward VIII, not simply through his enthralment with Mrs Simpson but also because of his fascination with European fascism. The play reminds us, far more explicitly than the film, that he admired Hitler on the grounds there were “no Jews or communists in Germany”.

But the nub of the play lies in the relationship between the stammering Bertie and the therapeutic Lionel which works better than in the film because we get more detail: at one point, for instance, we see Lionel persuading Bertie’s wife – the Queen Mother – to sit on her husband’s stomach to stimulate his breathing.

A thoroughly engaging piece of theatre combining humour, drama, poignancy and a slice of British history.

Royalists will enjoy its portrait of a king emerging triumphant while republicans will savour the irony that the monarchy’s survival depended on a failed actor from Adelaide.